“The ESG should be considered in a broader context that also includes qualifications frameworks, ECTS and diploma supplement that also contribute to promoting the transparency and mutual trust in higher education in the EHEA.” 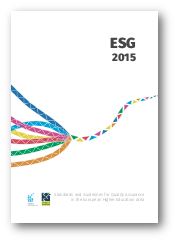 The earlier and first version of the ESG was adopted in 2005. In 2012 ministers agreed that the ESG should be revised in order “to improve their clarity, applicability and usefulness, including their scope”. The whole process lasted three years and is further described below.

To further support and promote a consistent, efficient and innovative embedding of the ESG (2015 version) at grass-root level, the EQUIP “Enhancing Quality through Innovative Policy & Practice” project was launched, with EQAR as project partner. One of the project activities was an analytical study into the early and later version of the ESG “Comparative analysis of the ESG 2015 and ESG 2005”.

Background and revision of the ESG

2012: Ministers agreed to revise the ESG

In 2012, in the Bucharest Communiqué, Ministers agreed on the following “We will revise the ESG to improve their clarity, applicability and usefulness, including their scope”, thus acknowledging the report prepared by ENQA, ESU, EUA and EURASHE (the E4 group) on the implementation and application of the “European Standards and Guidelines for Quality Assurance” (ESG).

Ministers mandated the E4 group in cooperation with Education International, BUSINESSEUROPE and the European Quality Assurance Register for Higher Education (EQAR) to revise the ESG and submit their proposal to the Bologna Follow-Up Group (BFUG). This revised version was adopted in 2015.

The revised version of the ESG was presented by the seven organisations to the BFUG after several consultation rounds involving both the key stakeholder organisations and ministries. The many comments, proposals and recommendations received have been very useful and of extremely importance for the revision process. They are reflected in the resulting revised version.

As requested by Ministers, the revised version make the ESG clearer, particularly in terms of their structure and in order to avoid potential confusion with their interpretation. The revised ESG also make a more explicit link to the learning and teaching process in the section on internal QA, and defines the relationship of QAwith other Bologna Process developments that have taken place since 2005 (including those relating to Qualifications Frameworks and learning outcomes).

The revised version of the ESG was endorsed by the BFUG on 19 September 2014 and adopted on 14-15 May 2015 at the Yerevan Ministerial Conference. Ministers adopted the Yerevan Communiqué, which included the Standards and Guidelines for Quality Assurance in the European Higher Education Area (ESG).

Structures for the revision process

The cooperating stakeholders take the process forward in consensus and as equal partners through a steering group while the technical drafting and preparation is being carried out by a smaller drafting group allowing them to work more efficiently. Further, this structure ensures that knowledge gathered during the MAP-ESG consultations will be fully utilised in drafting the revised ESG.

The drafting group consist of four experts, nominated by the E4 organisations are responsible for drafting revisions to the ESGbased on the direction given by the Steering Group. Drafts are then submitted to the Steering Group for consideration.

For further information about the ESG Revision please visit the official website of the project at: http://revisionesg.wordpress.com as well as the site of the main consultative groups at:

Timeline of the revision process

More information can also be found at the official ESG revision website.