At the General Assembly in Bucharest on 3 April 2019, held in the Rectorate of Polytechnic University of Bucharest, hosted by the Romanian Ministry of National Education in the framework of the Romanian Presidency of the Council of the EU, several elections took place:

Executive Board
According to the agreed annual rotation, the Executive Board assumed the following functions as per 1 May 2019, with Karl Dittrich as President:

See under Annexes “EQAR data” the full composition of the various EQAR bodies in 2019. 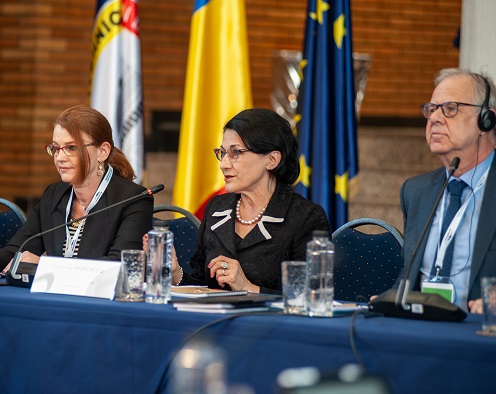 General Assembly in Bucharest, hosted by the Romanian Ministry of National Education

EQAR had some staff changes in 2019, not only because of the DEQAR project, but also because of the increased workload with regard to the Register Committee. A new Policy and Project Officer was hired, Jelena Šantić Stefanoska, to support the general operation of the EQAR secretariat, the DEQAR project and the Register Committee by analysing applications and reports, as well as review and update information and guidance for applicant agencies.

The financial year 2019 resulted in a small deficit of EUR 2 087,38, recovered from accumulated surpluses.

EQAR relies on a diverse funding base including annual contributions from its members (governments and European stakeholder organisations), application and listing fees paid by quality assurance agencies and occasional project grants. In 2019, EQAR received a grant under the Erasmus+ programme as coordinator of the DEQAR (Database of External Quality Assurance Reports) project.