EQAR members convened for the 17th General Assembly (GA) in the afternoon of 16 April 2021. The online meeting was organised back to back with the BFUG meeting, held on 15-16 April, as has been the longstanding tradition.

The Portuguese Minister of Science, Technology and Higher Education, Manuel Heitor, opened the General Assembly stressing the importance of facilitating and simplifying the processes for the accreditation of joint degrees, while preserving the national systems and keeping in line with national legislation.

Core business
Yearly recurring agenda items such as the annual accounts, the budget, the work plan and the annual report were presented by the Board and considered and approved by the General Assembly.

Special topics
Other issues under consideration included the Self-Evaluation Report and a Targeted Approach to Third and Further Agency Review. Members commended the Self-Evaluation Report, which they considered honest, realistic and well-executed. Feedback on the targeted review was positive, with members being appreciative of the enhancement-led aspect of the exercise. Members welcomed that the targeted reviews reflect the specific situation of each agency, but underlined that all ESG standards will remain binding for all agencies at all times and that a full, holistic decision will be taken after a targeted review. 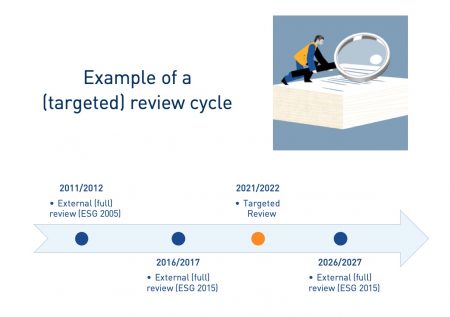 Click here to view the Proposal for a Targeted Review (PDF)

EQAR Newsletter (about 4 issues per year) topics include information about new agencies on the Register, relevant policy developments and the use of EQAR in the national quality assurance frameworks of the EHEA countries.
We use cookies to ensure that we give you the best experience on our website. If you continue to use this site we will assume that you are happy with it.Ok